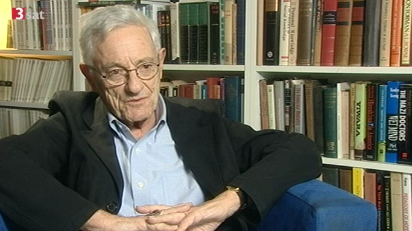 Dr. Gruen’s lifelong research in the origins of violence challenges Freud’s presumption that humans are naturally violent. According to Gruen, the basic problem is parenting that favors punishments and rewards which teaches children to please authorities but doesn’t lead to personal moral development. This leads to coldness, violence, and a society where individuals’ self-esteem is based primarily on success, status, and material gain.

Gruen was born in Berlin in 1923, and moved as a child to the United States. He studied psychology and psychoanalysis in New York and worked as a professor for seventeen years at Rutgers University in New Jersey. Since 1979, he has lived and practiced in Switzerland. Widely published in the German language, his groundbreaking first book, The Betrayal of the Self, was published in English by Grove Press in 1988.

Loviisa Peace Prize was first awarded in 1990. Earlier Peace Prizes have been awarded to Bishop Laszlo Tökes from Hungary, Metropolitan Bishop Kirill from Russia, author Jaan Kross from Estonia, Forensic dentist Helena Ranta from Finland, and Tarja Halonen, president of Finland. Lásló Tökés, who was awarded in 1990 works currently as a Member of European Parliment in Brussels and Kirill, awarded in 1993, is Patriarch of Moscow and All Russia.

The award ceremony will be held 12.30 at Kino Marilyn, Loviisa. Ambassador Ilari Rantakari will present the prize and Dr. Arno Gruen will give an acceptance speech. The ceremony is part of a full day of events, including seminars and concerts.

Loviisa Peace Forum is organized annually around Hiroshima day in August. The aim of the event is to find new ways to solve disagreements, to lessen fears of humankind, and to celebrate life through interaction, discussion, and art.

Sorry, no Tweets were found.